Here’s the short version of my bio:

I grew up in a small town in northern Alberta, but left in pursuit of degrees in psychology and education. During a decade out east, mostly in Montreal and New Hampshire, I picked up a husband with a cute accent and an MFA from Vermont College. I now live in Calgary, where I teach ESL and try to stay out of trouble with my husband and two daughters. Blank is my first novel. 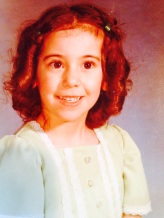 (Consider yourself warned: I have a tendency to be long-winded.)

I spent my childhood in a small town called Wandering River in northern Alberta, Canada. So small it’s actually not even a town: it’s a “hamlet”, which means less than 500 people live there. There’s no movie theater, police station or high school and no stop lights or swimming pools. What did we ever do with ourselves, you may ask? We played in hay barns and watched the northern lights and drove snowmobiles and all terrain vehicles and helped with farm animals and gardens and built forts and played sports. And there was a library in a room off the curling rink of the town (hamlet, sorry) quonest hut. (Google that one if you’re not from the prairies.) I loved books, and tried my hand at writing them as soon as I could. In grade two, I decided that when I grew up I would become a teacher and a writer “on the side”. Many decades later, I have finally reached my goal.

A little about my family: my dad owned a sawmill then his own logging company, but we also had a farm. I grew up around cousins and aunts and uncles and grandparents and trust me, it’s the best way to grow up. My mom worked as a teacher’s aide in my school and owned a few small businesses over the years. I have a big brother and we had lots of fun as kids doing KISS air guitars and building forts. Well, maybe he did most of the actual construction, but I loved playing in them and contributed to the interior decorating. My childhood was a dream.

I left Wandering River to head to university, and first completed a BA in psychology from Augustana University in Camrose, Alberta. I had a total blast and learned some stuff too. Then I went on to the University of Alberta and got an after-degree in elementary education. I also spent a very cool summer in Tokyo teaching English. After graduation, I wasn’t sure I was ready to settle down and be a good, responsible elementary school teacher. So I applied to be a language monitor with a government program and headed to Quebec to be an English teacher’s assistant. My family is French Canadian, but I didn’t know how to speak French and thought it was high time I learned. I also thought I would find culture and sophistication in chic Quebec and leave behind the cowboy scene of Alberta. Imagine my shock when I arrived in the town I was assigned to: first, it was called St. Tite. Try to say that and sound sophisticated. Next, it happens to be home to Quebec’s largest rodeo and western festival. I arrived to find a town decked out in full cowboy style. Thankfully, I had a great year getting to know Quebec culture and traveling around the province with other monitors. Did I learn French? Un petit peu. And my only stressful memory of that year was when they “initiated” the new teachers and lead me blindfolded onto a mechanical bull. Yeehaw.

After a bit of time substitute teaching back in Alberta, I decided to head back to Quebec and plant my feet in Montreal. Now that is a fantastic city. Great food, cool vibe, totally relaxed and open-minded, and, oh ya…I had met a cute guy who was going to move there too. He’s now my husband so I guess it wasn’t such a crazy leap. We spent nearly a decade in that wonderful city, where I taught English, we had our first daughter and I completed a Masters of Fine Arts in Creative Writing for Children and Young Adults at Vermont College. So, yes, I was always chipping away at the writer “on the side” idea. We also spent a few years in New Hampshire when said hubby snagged a job there, and so now we have a sweet little American daughter too. Really she’s Canadian because we moved back to Canada when she was 2 months old, but she still likes to sing “Born in the USA”. 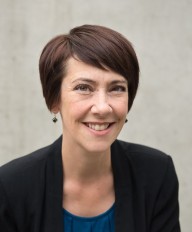 All-grown-up Me
(Photo by Eileen Abad)

We now live in Calgary, in a neighborhood near the river, and I teach ESL to new immigrants. I get to spend my time with fascinating people from around the world, people much smarter and more interesting than I am. And when I’m not working I love being with my two daughters and husband: we camp, we ski, we skate, we walk and bike, we watch movies and dance and do lots of stuff. Occasionally we try to clean the house. And of course I write.

Blank is my first novel.

Whew, that was long. But I did warn you, didn’t I?